Haryana Teacher Eligibility Test will be conducted by Board of Secondary Education Haryana (BSEH) on 12, 13 November 2022.

RRB Admit card 2016 - Check Railway Recruitment Board ASM, Goods Guard Exam Hall ticket Application Status CEN 03/2015 - RRB Admit card 2016 - RRB Admit card 2016 - Railway Recruitment Board is going to conduct written examination for the posts of ASM, Goods Guard Group between March and May 2016 as per official schedule.
Earlier Indian Railway had invited applications for 18252 posts of Station Master, Goods Guard, CA, TA, ECRC, JAA, Time Keeper etc. via regional RRBs. Eligible and interested candidates had applied against Advt. CEN No. 03/2015. Indian Railway is going to conduct this exam through online mode. Now the latest news is that All the RRBs will release the admit card around 2 weeks before the exam. Candidates can check their RRB Exam Admit card 2016 from the direct links given below.

Latest news : The written exam will be held on various dates from 28 March to 30 April 2016
Currently Admit cards had been uploaded for some regions. Railway will release the admit card and application status for remaining RRBs in upcoming days. You can check your region status from below given direct links.
The admit card will be available only at below given link at notified by various RRBs.
Download RRB Admit card here
Application status 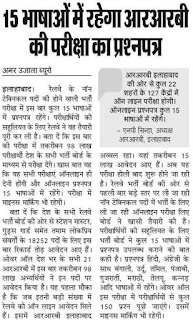 RRB Bilaspur, Secunderabad, Siliguri etc. had activated the link / released the notice for admit card download.
You can yourself confirm by visiting official websites given below. 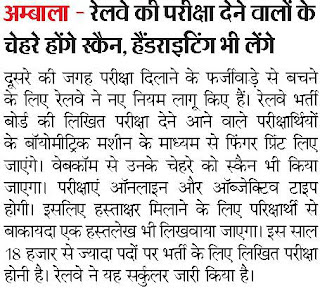 Candidates can download the admit card of RRB exam 2016 after release. The admit card will released on rrbonlinereg.in website as well as regional RRB websites.
Here we are providing the list of RRB from where candidates can check their ASM, Goods Guard Exam admit card along with direct link to rrbonlinereg. They have to first select their RRB and then click on admit card link given there.

Candidates can download their RRB admit card for written examination from the direct link given below. Huge number of candidates applied for these posts. Please note that no hard copy of admit card will be sent to any candidate. They have to download it from official website of which link is given above. SMS, e-mail will be sent to all eligible candidates regarding this vacancy updates.
Railway Station Master Admit card release date: around 10-20 March 2016

The e-call letter to the eligible candidates shall be available TWO weeks before commencement of the ONLINE examination on the website of RRB concerned for downloading. No admit card will be sent to candidates by RRBs by post. Candidates must bring their e- call letters along with a valid Photo ID (viz. Voter card, Aadhar Card, Driving License, PAN card, Passport, Identity Card issued by his employer in case the candidate is a Govt. employee, School/College/University Photo ID card
etc.) in ORIGINAL into the examination hall, failing which candidates shall NOT be allowed to appear for the ONLINE examination.
Candidates must also bring two colour photographs (of size 3.5 cm x 3.5 cm) and also a post card size photograph with clear front view of the candidate without cap and sunglaNon-Technicals, for appearing in the ONLINE examination.
Candidate should ensure that they are carrying the following while coming for the examination.

The test will be conducted online on a computer. There will be a total of 100 questions in the exam and time allowed is 1 hour and 30 minutes. There shall be negative marking in Computer Based examination and marks shall be deducted for each wrong answer @ 1/3 of the marks allotted for each question.
The questions will be of objective with multiple choices and are likely to include questions pertaining to General awareness, Arithmetic, General Intelligence and Reasoning, General Science and Technical Ability. The Question paper will have 150 questions, out of which 90 questions will be of Technical Ability & General Science and 60 questions from General awareness, Arithmetic, General Intelligence and Reasoning. The technical portion of 90 questions shall cover basic concepts of Science and Engineering from all the branches/disciplines of educational qualifications,

Based on the performance of candidates in the ONLINE examination (wherever applicable) candidates equal to the number of vacancies are called for document verification in the main list.
However, they are considered for empanelment only if there is shortfall in empanelment from the main list. During document verification, candidates will have to produce their original certificates. No additional time will be given and the candidature of the candidates not producing their original certificates on the date of verification is liable to be forfeited.

Haryana Teacher Eligibility Test will be conducted by Board of Secondary Education  Haryana  (BSEH) on 12, 13 November 2022.